welcome to the site! Read the description to the left for details regarding the theory behind this site. Some may know this section as an "Abstract"

The History of Energy

the beginning is the end

Under this section is a paper written for an Honours Psychology course, the History of Psychology. The task was to trace a topic from contemperary Psychology back through various historical stages to see how that topic has grown over the course of time. The topic I chose was energy, or Energy Psychology. Enjoy research from Feinstein (most recent) all the way back to Pythagoras.

The Future of Energy

the end is the beginning. This section includes all the previous homepage fails ;) enjoy!

This is the major veiwpoint taken on this site in regard to these topics, but since the completion of my Masters degree in Gender Studies, I've been trying to go back and make it more inclusive. This link includes a proposed field theory for Psychology because the two major branches of Psychology (quantitative and qualitative) find it hard to see eye to eye. This (and the next) section is for members only.

This section proposes a Grand Unified Field theory or "theory of everything" for Physics, backed up by a mathematical equation.

This section unites all sections together to unite the branches of Science and Religion. Many different perspectives are taken and these two seemingly opposing forces are united through many different angles.

This section looks at the conflicts or cycles between New Age free thought and Orthodox dogmaticism. The feud between these two opposing forces revealed the truth regarding the story of Jesus, what he really taught and to whom he truly gave the rites to teach his faith. This section explores why the movie The Last Temptation of Christ was banned in other countries, looks at the Da Vinci Code and presents a controversial paper/theory showing the hidden meaning of world religious symbols.

This section begins with a confusing paper about taking back the spirit. If the point can be penetrated, it tells an interesting story about Modernity and the Age of Reason, with a twist by providing evidence that emotion could be considered superior to reason. It also complicates Carteasian mind/body distinctions by adding spirit back into the equation. Have fun following that one lol. I can't even follow it ;) There are other papers about explaining Mystical experiences and others comparing Western and Eastern styles of consciousness. My favourite is the book review of Kabbalah. I like how this site allows me to go back and fix/reword old papers/ideas. This section really details what it is like to have a theory in the making and shows how ideas develop over time. One day my ideas/theory will be comprehensive to others outside my wacky brain :)

This section includes research done on the importance of emotional charge on ESP communication. It proposes that it is emotion communication that makes telepathy successful. The second paper in this section addresses dreams and dream interpretation. Two Dream interpretation methods (Freud's and Jung's) were analyzed to determine which method produced the most accurate results. The third paper presents research on Understanding Altered States of Conciousness and the last paper in this section is about Western Consciousness and how we are very individualized and perhaps out of balance due to us being lost in the Grand Illusion (Maya). The next paper looks at The Implication of Eastern Concepts on Western Ideals, to propose a potential balance between the two world views.

This section begins with a work that is a detailed analysis of the screenplay/poem found in the Art section of this site. This paper looks at the research behind the play that inspired its manifestation (or why I wrote the play). It is hard to avoid the Book of Revelations when the topic of the Apocalypse comes up, so the next paper in this section is a comparison of the similarities and differences of the Book of Daniel and the Book of Revelations. Many similarities were found and the research leads one to beleive that we are in the dawning of the Age when we will see great changes in the world as we know it today.

This section includes papers on 3 pathways to happiness (physical, mental, emotional), followed by a paper on how to end prejudice, a paper on the polarization of the sexes is next (as it is hypothesized by this site that the true or pure unification of All That is in the Universe is solved by the reunification of the energy of the sexes ;). Finally, this section ends with an empirical thesis exploring the equal validation or rational and emotional styles.

This section contains a play or screenplay called the Grand Drama that is written entirely out of prose (the owner and creator of this website has personally written everything that appears on it). This work of art reveals a hidden message, one that may unlock the key to the mysteries of the universe! This page also includes a shortened poem of the Grand Drama and provides a link to a song that is about Plato's Analogy of the Cave (members only).

this is a collection of my poetry - enjoy!

This is a collection of my songs - enjoy! =)

This is my photo collection

Key to the Legend

the parts under construction are labeled as such or blanketed by <<<  ____  >>> indicating personal notes to self to improve the site, or the layout of the information presented.

The yin yang can represent the male and female attributes fused into a unifying symbol. The yin (female) is usually considered to be receptive and yang (male) is usually considered to be active. In these descriptions themselves, there is no hierarchy or ontological distinctions, but sometimes ideas of evaluation infiltrate and these distinctions lose their neutrality. Some come to think that one is better than another; or that action is the better than being receptive. This, however, goes against what Taoism or this symbol is really about. Sometimes the best action is being receptive. Therefore, both yin (female) and yang (male) are equally valid in their own right for different purposes. It is the situation or circumstance that may require the use of one more than another. 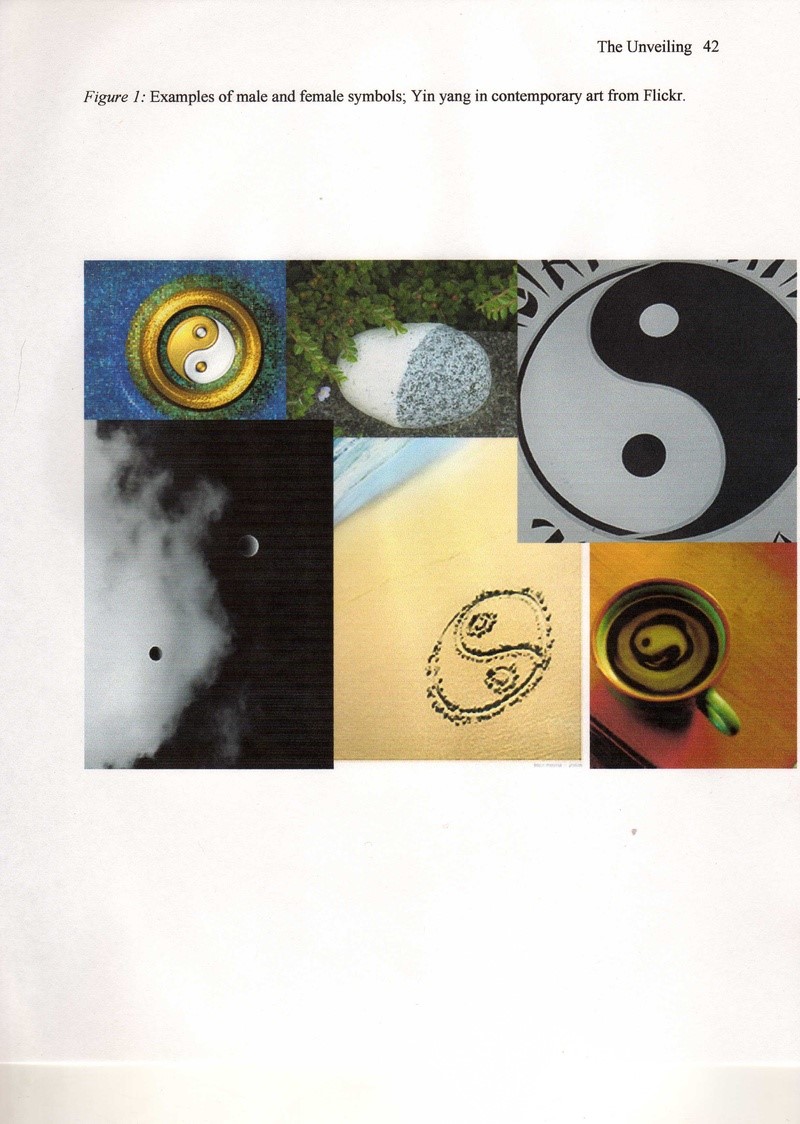 Not only does the Kama Sutra suggest that enlightenment can be reached through sexuality and orgasm, but also the male God, Shiva has a wife Shakti, who is the Female God or feminine energy of the universe. 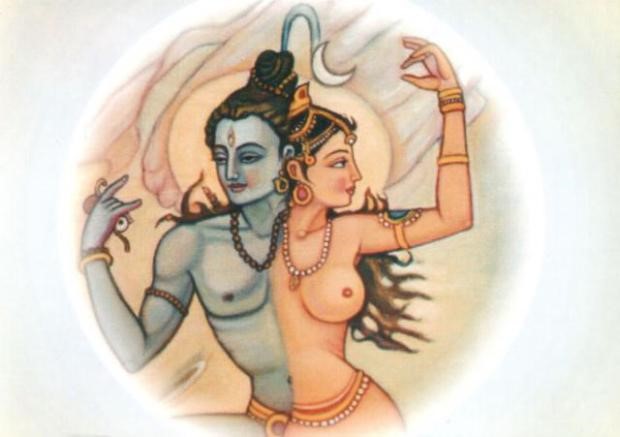 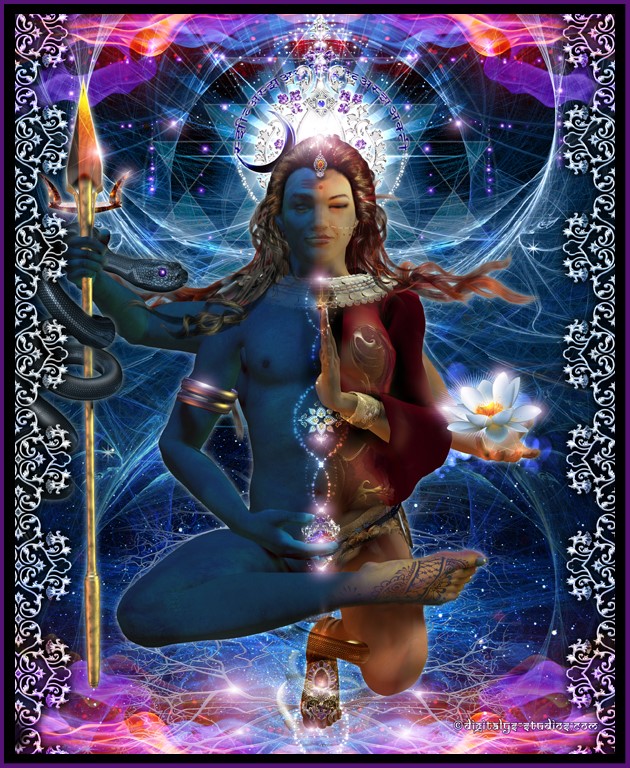 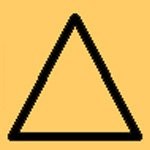 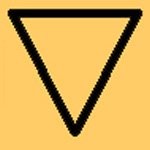 Together = the star of David

Judaism
"On the day that God created Adam, in the likeness of God He created him, male and female He created them. He blessed them and called their name Adam...Genesis 5:1-2 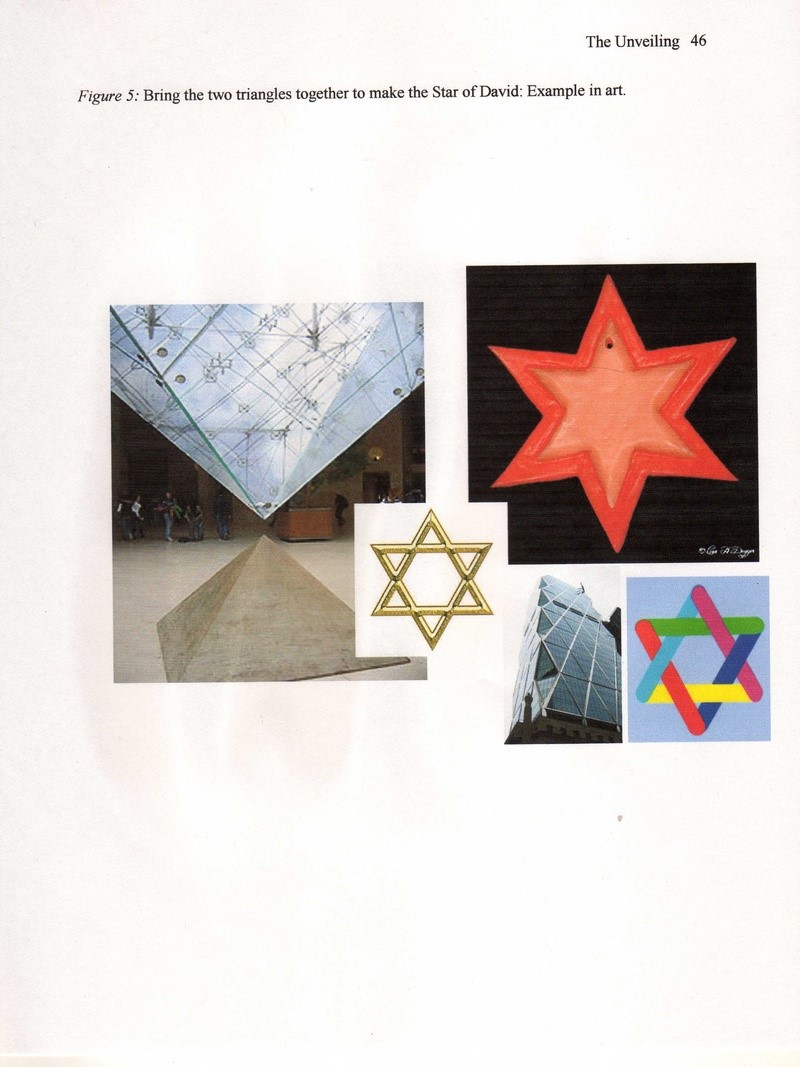 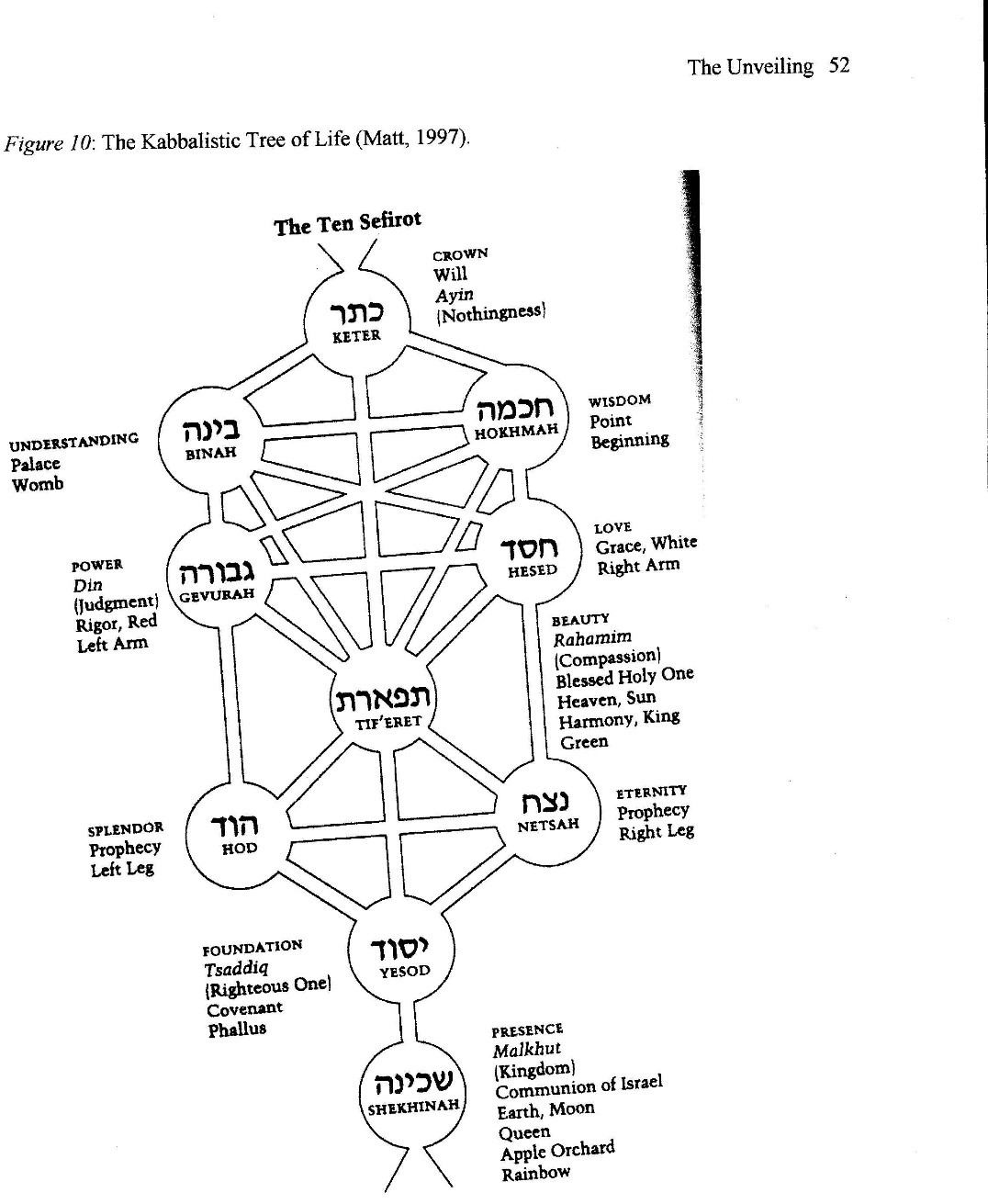 (chapter XLII) Mathers
"And when He wisheth to separate them He causedth an ecstasy (or trance) to fall upon Microprosopus, and separateth the Woman from His back. And He conformeth all Her conformations, and hideth Her even unto Her day, on which She is ready to be brought before the Male.(1028-1029) And when they are associated together , then are They mutually mitigated in that day on which all things are mitigated. And therefore are the judgements mitigated mutually and restored to order... (v1039).

According to Aztec tradition, their creator god Ometeotl is double-gendered. 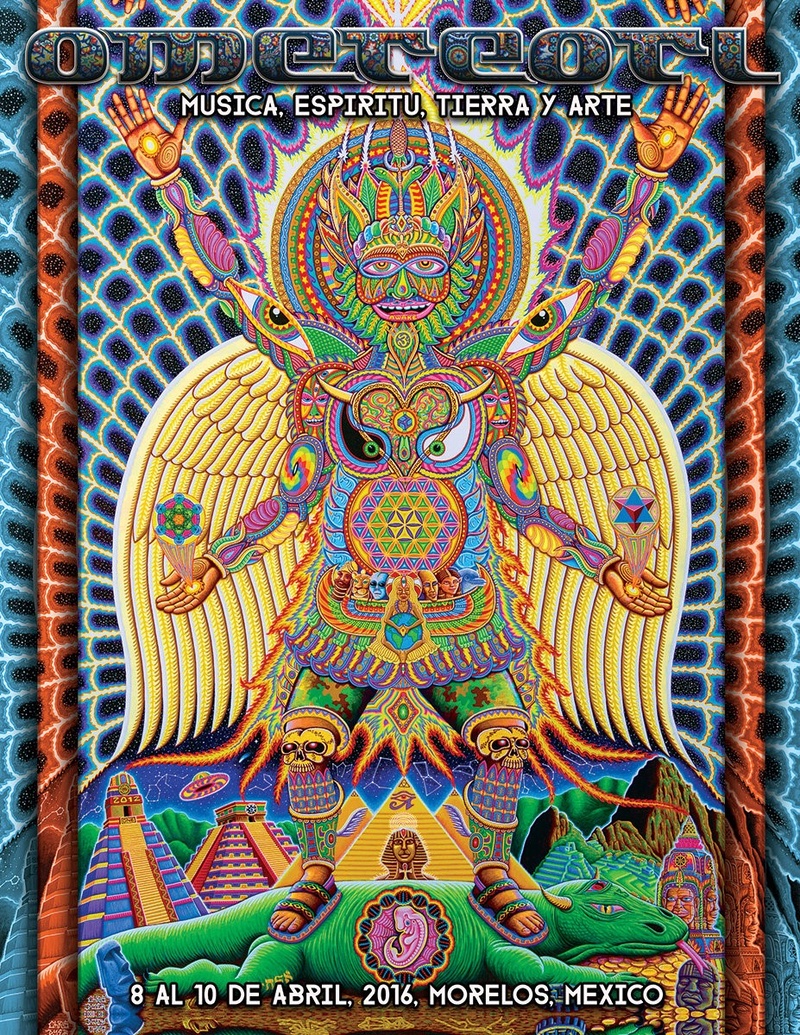 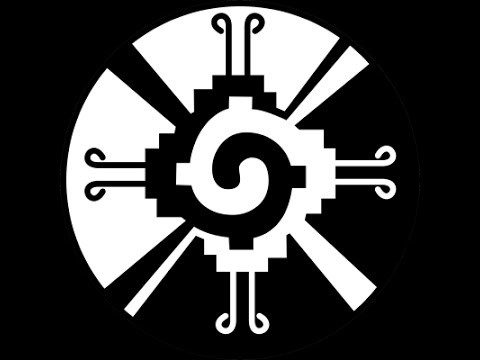 Note that the symbols in both hands represent the 6-pionted star and the major symbol is very much like the yin yang.

The Vertical line represents the male principle (Heaven)Gospel of Thomas
"and when you make male and female one, so that the male is no longer male and the female no longer female, then you shall reach the kingdom of heaven."
Gospel of Philip
"If the female had not separated from the male, the female and the male would not have died. The separation of male and female was the beginning of death. Christ came to heal the separation that was from the beginning and reunite the two, in order to give life to those who died through separation and unite them. When Eve was in Adam, there was no death. When she was separated form him, death came. If she enters into him again and he embraces her, death will cease to be.” 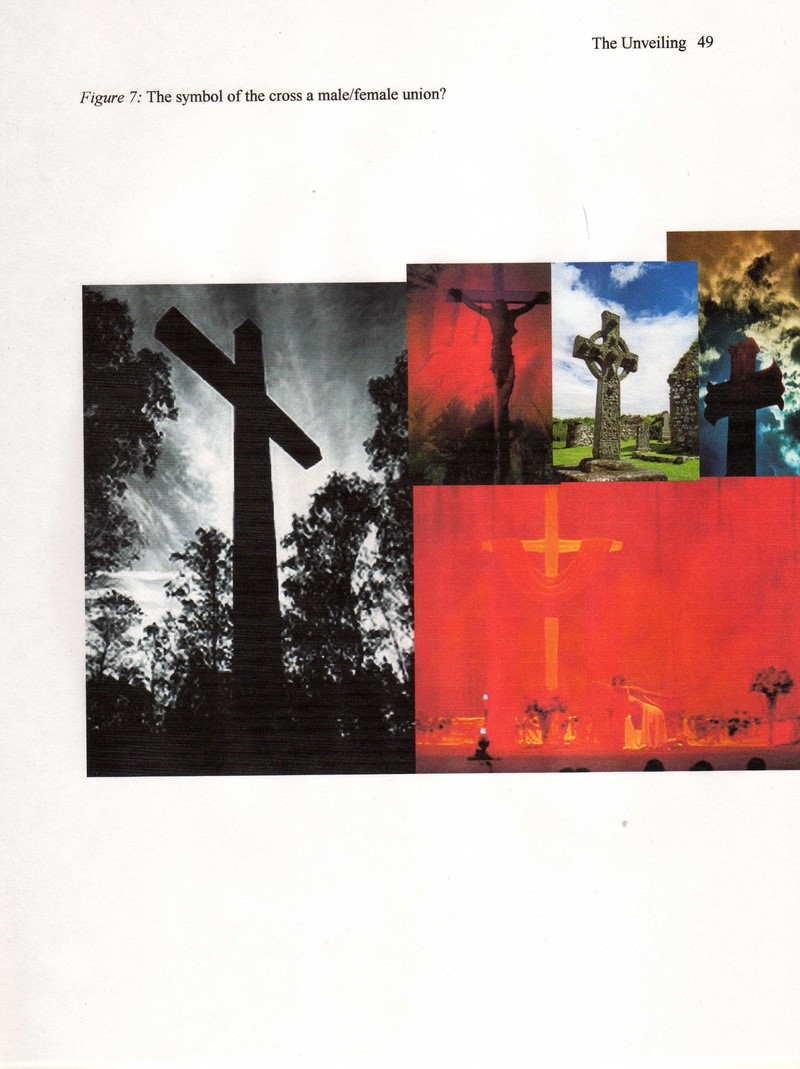 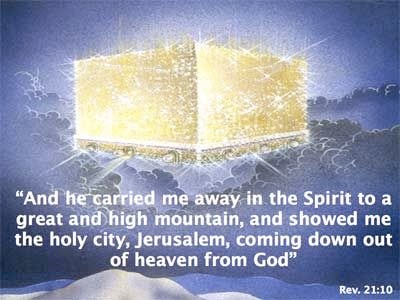 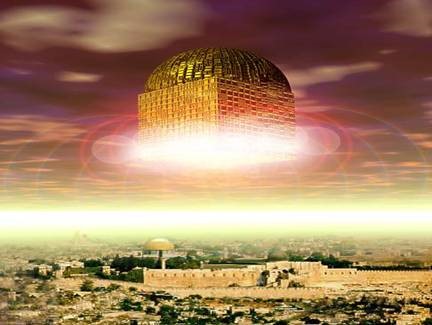 Alpha and Omega also represent male and female aspects, note the trianglar representation on the right and the cross symbolism on the left. 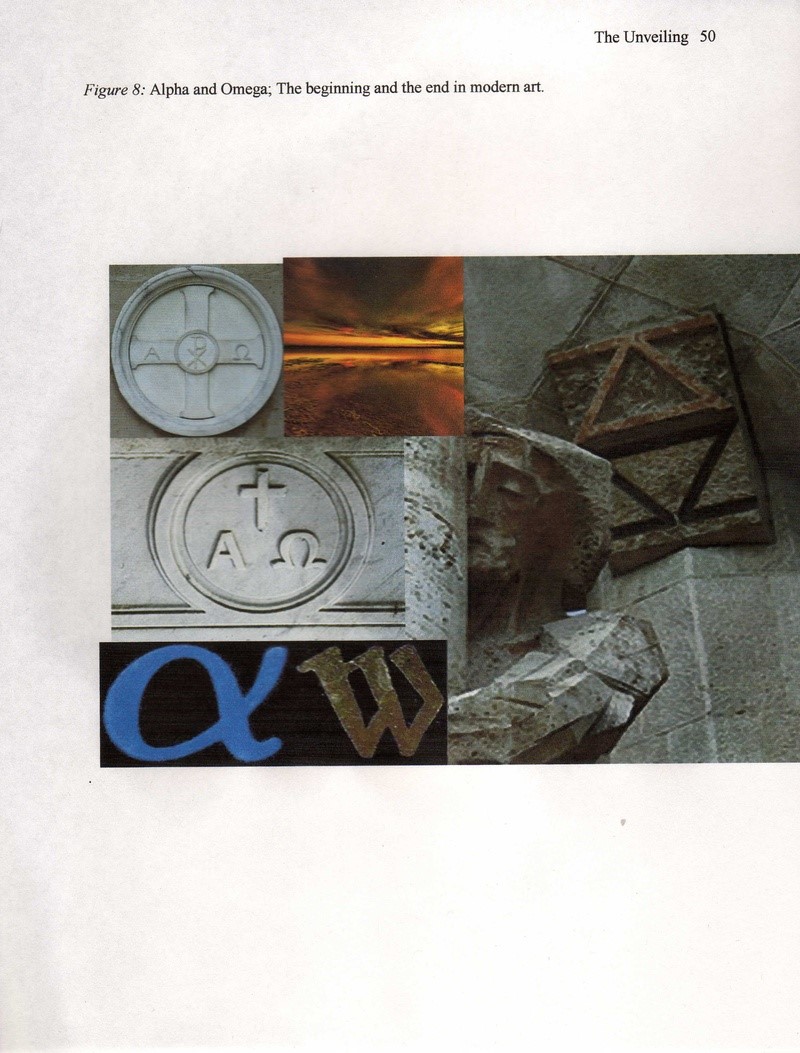 The moon tends to represent female and the star (our sun is a star) represents male. Placed together this symbol could be seen as representing both male and female aspects.